Michael Smith, usually referred to as Mikey Smith (14 September 1954 – 17 August 1983), was a Jamaican dub poet.[1] Along with Linton Kwesi Johnson, and Mutabaruka, he was one of the best-known dub poets. In 1978, Smith represented Jamaica at the 11th World Festival of Youth and Students in Cuba. His album Mi Cyaan Believe It includes his poem of the same name. He had left-anarchist leanings and Rastafarian sympathies, and was allegedly murdered by political opponents associated with the right-wing Jamaica Labour Party (JLP) after he had heckled the Jamaican Minister of Culture at a political rally on 17 August 1983.

The FBI’s recent announcement that it has placed former Black Panther and escaped prisoner Assata Shakur at the top of its Most Wanted list and the doubling of the reward for her capture by the State of New Jersey is a development that progressives should not ignore. This newly intensified effort to put Shakur back in prison matters for a number of reasons.

First, by elevating this 40-year-old case to top priority, Obama’s Justice Department is actively memorializing the struggle for black freedom of that era, but in a way that offers us a criminalized, even militarized interpretation of it. How we understand the past has bearing on our political present, and making Shakur, a symbol of black militancy of the 1960s and ’70s, into a high-level national security threat serves to criminalize the greatest movement for democracy in the 20th century. What’s more, fashioning this morality tale erases the central role of the FBI’s COINTELPRO in her controversial case, a willed forgetting of the well-documented framings, murders, and false imprisonments aimed at the black liberation movement and others of that era, as opposed to a clear-eyed assessment of the disputed facts on the ground.

Second, the legal and rhetorical framework of terrorism being used in this case strengthens the U.S. state’s ongoing and intensifying campaign to threaten, harass and detain not only Muslims and Arabs, but antiwar, and green activists. Shakur was given the designation of “domestic terrorist” under the Patriot Act in 2005, and a glance at mainstream news stories on the Shakur case right now shows the casual interchangeability of the terms “militant” and “terrorist,” turning the domestic racial conflicts into an open war by the United States against oppressed groups inside its borders. The authority of federal agencies to wield military power against U.S. citizens, which has become more common under the Obama Administration already, is deepened by turning Shakur into a symbol of demonic power. Such militarization also reflects the full realization of a carceral state that has enormously expanded in the last two decades, imprisoning more people than any country in the world, both per capita and in absolute numbers, with vast over-representation by black and brown people.

Third, further connecting the domestic and international, the placement of Assata Shakur on the FBI’s Most Wanted list is a way for the Obama Administration to test the resolve of Cuba in the twilight of the Castro regime, to see how much power it can now wield there through both engagements and threats. As an AP story on the Shakur case thought it worthwhile to note, “This week, the State Department said it has no plans to remove Cuba from a list of state sponsors of terrorism that also includes Iran, Syria and Sudan.” This is a move that reverberates throughout the western hemisphere given recent U.S. activity in Bolivia, Honduras, and most recently the U.S.’s refusal to recognize the electoral victory of socialist president Nicolas Maduro victory in Venezuela.

The renewed state interest in Assata Shakur is not an anachronism, nor mere score-settling from a prior conflict. It goes to the heart of a set of interrelated issues that should be of deep concern to anyone concerned with civil liberties, political freedom, U.S. empire, and the future of racial justice. We should be asking Attorney General Eric Holder why $2 million is being put up in a 40 year-old case. State Police Superintendent Col. Rick Fuentes said at a news conference Thursday that the case was “an open wound” for troopers in New Jersey and around the country. Yet the FBI’s full-scale assault on the social movements of the 1960s and 1970s remains an open wound for the nation itself. A truthful accounting of state repression in that era is required if we want to heal it, not making Shakur into a scapegoat.

Since the end of slavery, Jamaicans started spreading all about…

I met this elder in Havana, Cuba. As Jamaican descendants we where both very excited. We spoke in ‘patua‘ of our heritage and preserved customs… 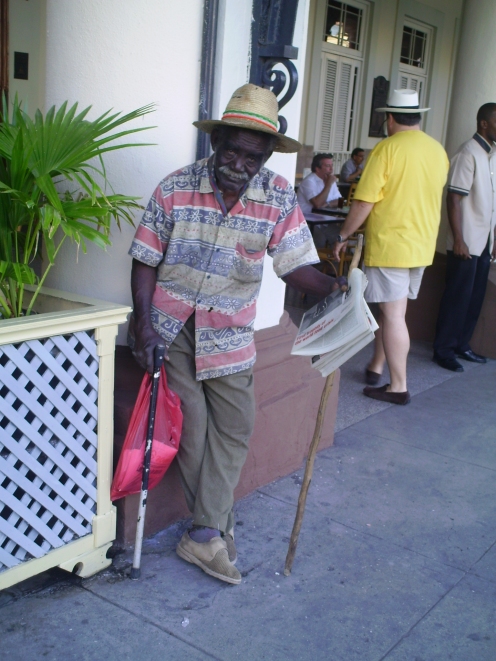